give IBM Watson Internet of Things a bird’s eye view

BACK TO NEWS ROOM

Now, rather than climbing towers, inspecting key areas and reporting back findings, teams can deploy Aerialtronics drones from the ground and, through high definition cameras and Watson Visual Recognition APIs, immediately gain a complete 360-degree, high resolution overview while understanding what it’s seeing. Drones can capture these important images in minutes and immediately send them to the IBM Watson IoT Platform to be analyzed in near real-time.

Aerialtronics’ commercial drones are the first to leverage the IBM Watson IoT Platform and the Visual Recognition APIs to analyze images and identify specific areas of concern such as loose or frayed cabling and damaged equipment that could impact the quality of telecommunications service to consumers. Constantly learning over time, IBM Watson IoT solutions provide a confidence rating to teams so they can determine if and when repairs should be made. As a result, businesses have the potential to significantly increase the number of daily cell tower inspections, reduce possible human error and help maintain the safety of workers.

“Pairing the unlimited perspective of drones with Watson IoT can bring these powerful cognitive capabilities to any location, where it can be used to analyze unexpected traffic patterns resulting from nearby construction or how a train is performing while it’s in transit,” said Harriet Green, General Manager, IBM Watson Internet of Things, Commerce & Education. “We are very excited to work with Aerialtronics to bring these capabilities to telecommunications providers and we look forward to continuing to push the boundaries on what this pairing can accomplish.” 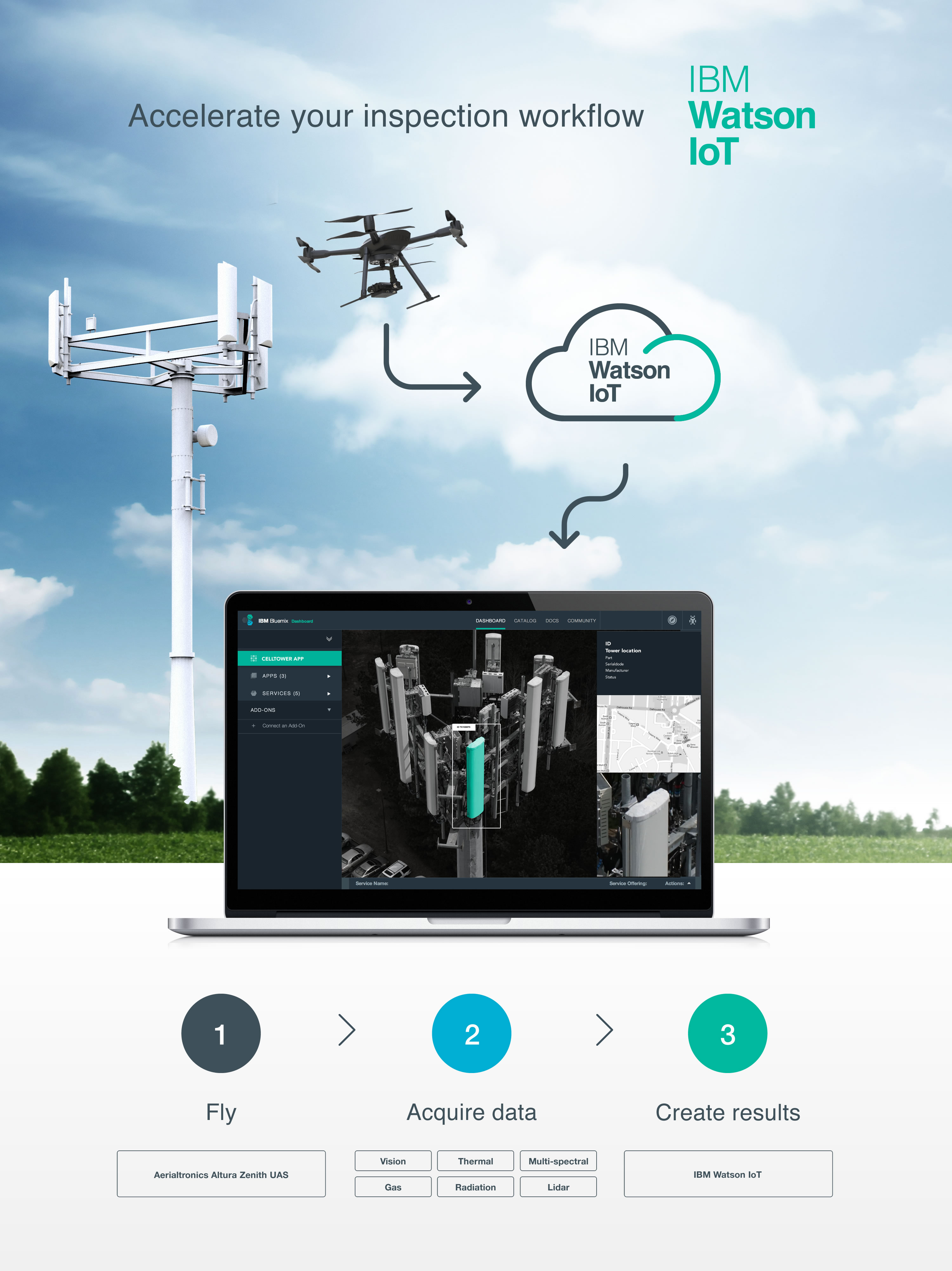 By putting Watson IoT capabilities into flight, Aerialtronics can help companies open up a number of possibilities to gain insight in places not easily accessible to humans. Possible scenarios include:

– Crowd Safety: City Law enforcement could gain a full aerial view of crowds at major events, tracking the flow of individuals and identifying any anomalies that might be cause for concern. For example, if an unusually large group of people gathers near an emergency exit, teams can be alerted to clear these areas for easy accessibility.

– Damage Assessment: Emergency First Responders could prescribe a specific flight plan for drones, which can then take capture images of their assigned grid. These images could then be analyzed to access potential damage, dangers, and to drive immediate and appropriate emergency response.

– Aviation Inspection: An aircraft manufacturer could use a drone to inspect the surface of a stationary aircraft as part of its regular maintenance and instance evaluation. The drone could also be programmed to follow the same flight plan of an aircraft, taking images on the fuselage in-flight to provide an even more valuable layer of insight that teams could examine to help identify potential areas of concern and prescribe immediate and appropriate action.

Over time, Aerialtronics’ Altura Zenith multirotor will be used to examine other aspects of cell tower performance. Firstly, it will ensure that new towers have a clear line of sight with existing structures and antennas are properly positioned to ensure that customer calls are not dropped as people move from one tower to the next. Drones can also be used to measure the cell size and radio strength in 3D to determine the full range of each tower and which structure should service which location.

“We are excited to be working with IBM to bring these valuable Watson IoT capabilities to businesses across a variety of industries,” said Jeremy Wigmore, CEO of Aerialtronics. “By pairing the unmatched perspective of drones with the proven power of Watson IoT solutions, companies can gain actionable insights into anything, anywhere and use this knowledge to help drive important business decisions.”

Aerialtronics is a manufacturer of unmanned aircraft systems for business and governments worldwide. Based in The Netherlands, Aerialtronics develops and builds multirotor platforms to aviation-grade quality standards, making them reliable, stable, and versatile. These semi-autonomous unmanned aerial systems comprise full aerial data solutions to support a variety of commercial applications.

IBM is an established leader in the Internet of Things with more than 4,000 client engagements in 170 countries, a growing ecosystem of over 1,400 partners and more 750 IoT patents which together help to draw actionable insight from billions of connected devices, sensors and systems around the world. Building on the company’s $3 billion USD commitment to bring Watson cognitive computing to IoT, IBM in December 2015 announced that Munich, Germany will serve as the global headquarters for IBM’s new Watson IoT unit, bringing together 1,000 IBM developers, consultants, researchers and designers to drive deeper engagement with clients and partners. For more information on IBM Watson IoT, please visit www.ibm.com/iot